There is an elephant in the room.

You’ve heard that one, right? That phrase has always annoyed me to some degree. The team identifies the presence of the elephant and yet carries on with the agenda, ignoring the implications. If there is an elephant in the room, let’s talk about her. Let’s face up to reality. Let’s do something!

Do you have an Elephant in the room? Ignore it and you may just get trampled by the Gray Rhino. Michele Wucker has coined this phrase for an observable and recurring phenomenon. The Gray Rhino is a peril bubbling up, that everyone can see. The challenge is in broad daylight and yet, consciously or unconsciously (probably a combination), we ignore it until it reaches absolute crisis or boiling point.

We can come up of hundreds of examples of Gray Rhino’s in the realm of business, politics, religion and community affairs. Chicago politics instantly comes to mind for me. When I moved here, we joked about the “Chicago way”. The phrase “kick the can down the road” is flippantly tossed around as the pensions go unfunded, the school system decays and violence escalates. National debt, climate change, social security, the list is endless.

Why do leaders, decision makers, and everyday citizens keep failing to address the obvious dangers before they spiral out of control? More importantly, what CAN we do to seize opportunity out of these difficult situations?

I was thrilled to chat with Michele Wucker, author of:
The Gray Rhino: How to Recognize and Act on the Obvious Dangers We Ignore. 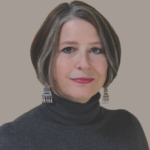 Michele Wucker coined the term “gray rhino” to draw attention to the obvious risks that are neglected despite – in fact, often because of– their size and likelihood. The metaphor has moved markets and shaped financial policies around the world, and her recent TED Talk about gray rhinos attracted more than one recently million views in two weeks. She is the author of three books, most the international bestseller, THE GRAY RHINO: How to Recognize and Act on the Obvious Dangers We Ignore, which China’s leadership has used to frame and communicate its crackdown on financial risk. Drawing on three decades of experience in financial media and think tank management, turnarounds, and policy analysis, Michele is founder of the Chicago based strategy firm Gray Rhino & Company. She speaks regularly to high-level audiences on risk management, macro strategy, and decision-making. She has been recognized as a Young Global Leader of the World Economic Forum and a Guggenheim Fellow, among other honors. Michele appears often in leading global media. Visit her website at www.thegrayrhino.com.

As always, we’d love to hear from you.

Tom Rosenak leads Diamond Mind Enterprises with decades of experience as a persuasion and management training consultant. As a certified TotalSDI Facilitator, he pays special attention to clients’ strengths to develop them to their greatest capabilities. Call Tom at (847) 530-3471 and start building your persuasive abilities today!
PrevNext